Description: The common snipe is a small, stocky wader, with short legs and long straight bills. It is a migratory bird, but there are also 80,000 breeding pairs which are resident to the UK. 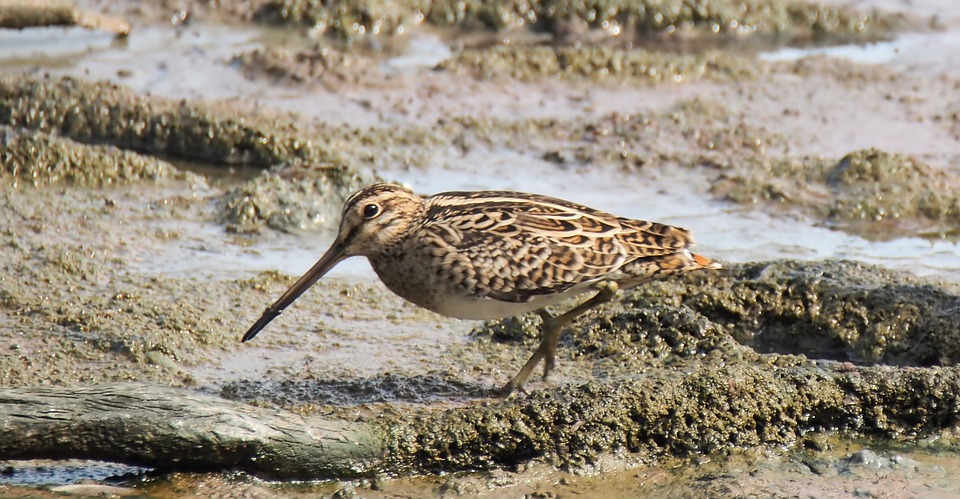 Species: The common snipe is a snipe wading bird, characterised by the long slender bills and camouflage plumage. Gallinago snipes have a worldwide distribution, with common snipes being the most widespread. The common snipe has two subspecies: the Gallinago faeroeensis found in Iceland, the Faroes, Shetland and Orkney, which winter in Britain and Ireland, and Gallinago gallinago in the rest of the Old World.

Colouring: Adult common snipes have a mottled brown colouring, with yellow stripes on top and a pale underside. There is a dark stripe through the eye, with lighter stripes above and below. Their long beak is black or brown in colour.

Habitat: The common snipes’ natural habitat includes farmland and grassland, and being a wading bird, marine and tidal estuaries and wetland. They avoid dense vegetation, seeking marshy areas with patchy cover. It is a shy bird, concealing itself in the ground vegetation.

Diet: Common snipes feed mainly on invertebrates such as insect larvae and worms. They may also feed on crustacea and snails. They feed mostly at dawn and dusk.

Breeding: Common snipe’s nesting season runs from mid-April to August, with a pair raising one brood, usually about four eggs which are olive-brown and spotted. Both parents will watch over and feed the chicks until they are ready to fledge.

Do you enjoy shooting common snipe in the winter months? We’d love to know some of your stories – why not leave a comment on our social media? In the meantime, update your shooting wardrobe with one of our tweed shooting jackets, and have a read of some of our game bird animal fact files such as red grouse and ptarmigan