Description: The Eurasian teal, also known as common teal or simply teal is widespread and the smallest dabbling duck breed, found in temperate climates across Eurasia. They are sociable birds, forming large flocks outside the breeding season. 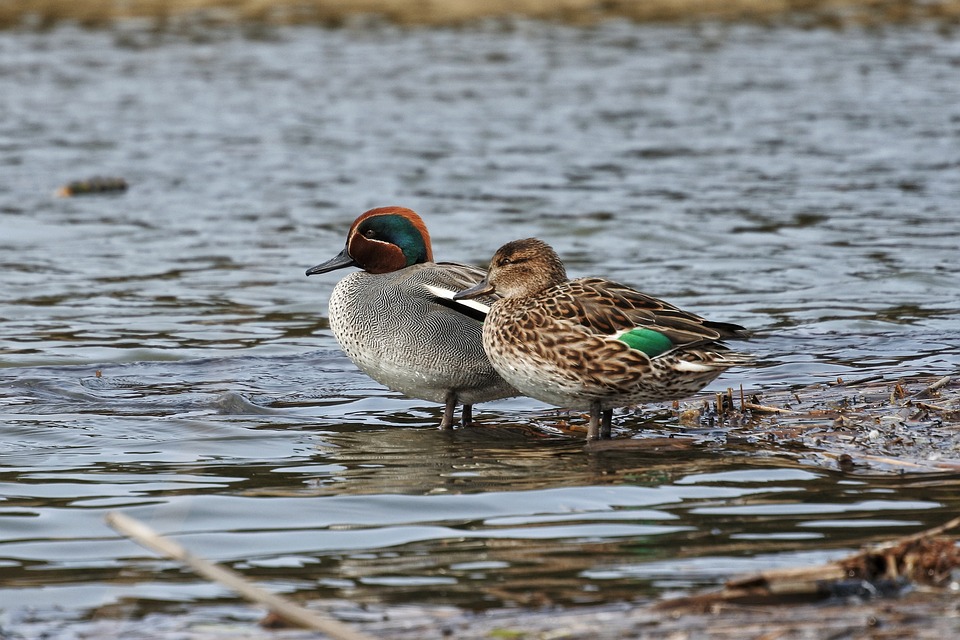 Species: The Eurasian teal belongs to the ‘true’ teal group of small Anas dabbling ducks, closely related to the mallard. Also in the group include green-winged teal and speckled teal.

Colouring: Teals are sexually dimorphic and also change plumage depending on the season; the male drake has a grey body, with a white stripe on their flank, a yellowish behind and buff breast. Their head and neck is chestnut with a dark green half crescent over their eyes, bordered with yellow-white lines. Female hens have a mottled brown body, darker brown on the top of the head with a green speculum on the upper wing. Males look more similar to this in the non-breeding season.

Habitat: The Eurasian teal breeds across northern Eurasia and winters in the south. In the UK, there are 2,100 resident breeding pairs but have 210,000 wintering teals. Their preferred habitat is wetland, marchland, freshwater pools and lakes.

Diet: As dabbling ducks, teals eat aquatic invertebrates, crustaceans, insects and larvae, and in winter will feed on grasses and seeds of aquatic plants. They feed during the day when breeding but are often crepuscular in winter; eat at twilight.

Breeding: The breeding season is from April to May, with pairs forming in winter and travelling to breeding grounds together in March. Nests are hollows lined with leaves and down feathers found in dense vegetation close to water. Clutches are usually 8-11 eggs and are incubated for up to 23 days. The young stay with the mother for about 25 to 30 days before fledging. 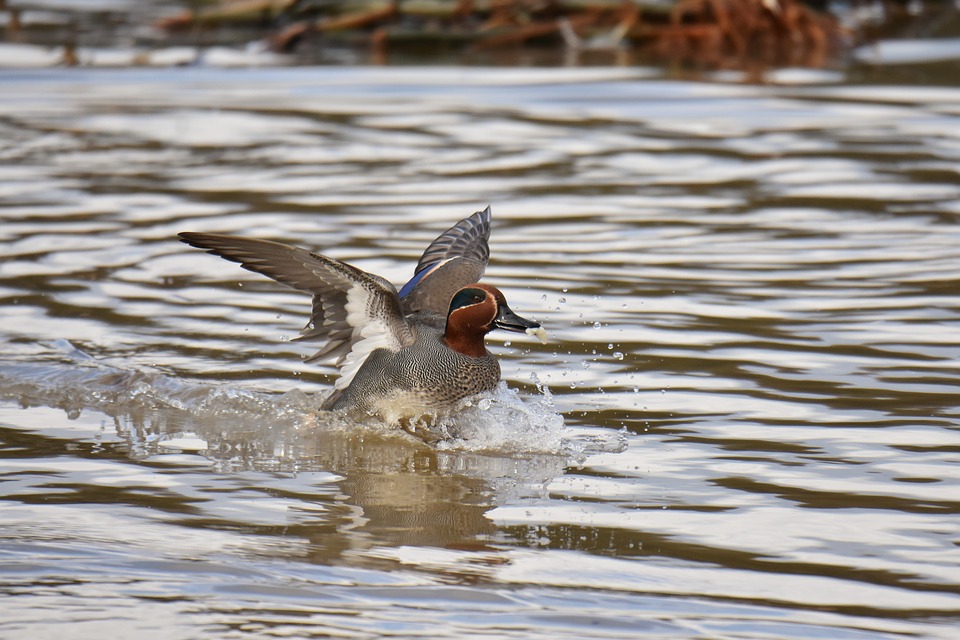 •    The maximum lifespan of a Eurasian teal recorded was 27 years, particularly for a small bird.

•    The teal is a noisy species, with both the male and female making distinct noises. Males give s soft, high-pitched whistle and female is quitter       uttering sharp quacks.

•    Teals will form flocks of between 30 to 100 individuals during the non-breeding season.

•    Drakes and hens are monogamous each breeding season, but with males often outnumbering females, there may be extra-pair copulations.

•    Mating displays include jerky movements on the water and aerial chases above the pools and marshes where breeding occurs. Females will also perform displays to their chosen male.

•    Eurasian teals can be migratory or partially migratory. Those who breed in temperate climates will be residents year round, and northernmost       breeders will fly south for winter, around October and November, returning in March and April.

•    When teals are flushed, they tend to rise almost vertically, even from the water.

•    As a game bird, teal is popular for its texture and taste, being gamier in flavour than larger duck species.

•    As a small bird, it is suitable to be served as a whole portion for one person.

Do you enjoy shooting teal when they winter in Britain during the shooting season? If you do love to head out to wetland areas, make sure you have the right gear, from gun slips and cartridge bags to waterproof trousers. Be sure to take a look at our other animal fact files too, such as the common snipe and pheasant.