Description: A powerfully built animal, badgers have small heads, stocky bodies, small black eyes and short tails. Badgers have long, powerful claws, useful for digging for food, and their snouts are muscular and flexible. Males badgers, or boars, have broader heads and narrower tails than the females, or sows. Their fur is coarse, and longer in the winter. 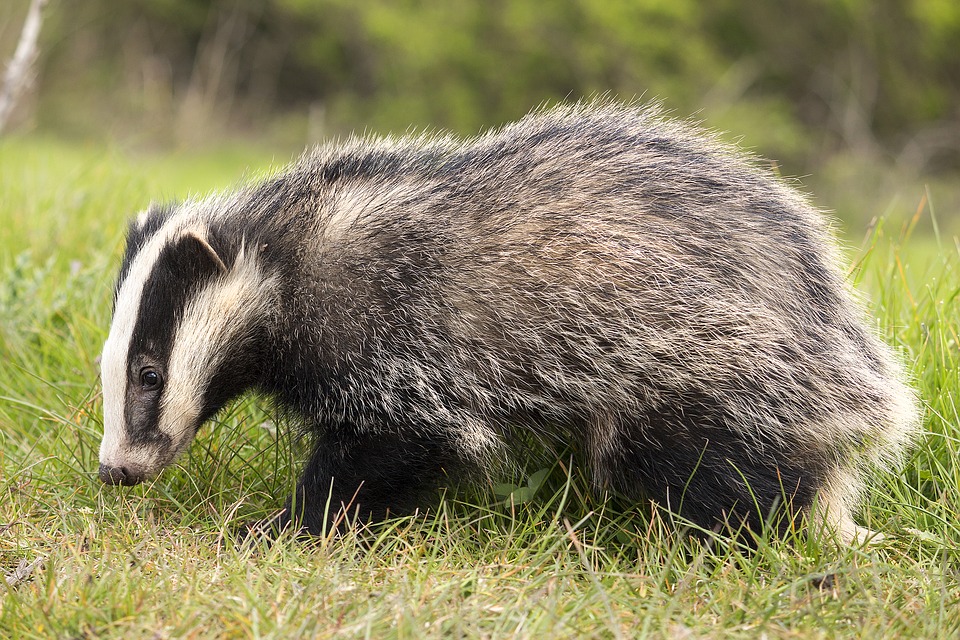 Species: The European badger is species from the Mustelidae family, which also includes otters, weasels and wolverines. It is native to Europe and parts of West Asia, and there are eight subspecies of European badgers, such as the common badger (Meles meles meles).

Colouring: The European badger colouring is a light, silvery grey on the back and sides, with the belly being lighter with a brownish tint. The throats, neck, chest and legs are black. Badgers distinctive feature is the black bands on their heads, over their eyes and ears; contrasting with their white face. Their ears often have a white tip. Melanism and albinism are also known to occur in badgers.

Habitat: The European badger is native to most of Europe, ranging from Western Europe to Eastern Europe and Britain and Ireland. In the UK, there was a 77% increase in numbers in the 1980s and 1990s. Badgers' habitat is deciduous and mixed woodlands, clearings and scrubland, building underground setts. It has also adapted to suburban areas, though not as much as the red fox.

Diet: The badger is classified as a carnivore, though they are among the least carnivorous animal, being adaptable and opportunistic omnivores. Their diet includes a variety of animals and plants, such as earthworms, insects, carrion, small mammals like rabbits and mice.

Breeding: European badgers breeding season tends to peak in spring between February and May, though may occur throughout the year. Boars reach sexual maturity around 12 to 15 months and sows in the second year. Cubs are born January to March, in underground chambers, in litters of one to five cubs.

•    European badgers are social, forming groups called a cete or clan, with six adults on average, though there can be up to 15.

•    Badgers are usually monogamous; boars typically mate with one female for life, though sows have been recorded as mating with more than one male.

•    Badgers are nocturnal animals, though may also be seen at twilight.

•    Badgers can be aggressive when it comes to territory and mating, and boars will fight, biting on the neck and rump.

•    Badgers' smell is acute about 800 times better than a human, though their eyesight is poor and monochromatic.

•    Badgers do not hibernate in winter, though are much less active in the colder months.

•    More than 50,000 badgers are killed by cars every year, and badger culling in the UK is permitted under licence in set areas and under a timescale to reduce numbers and control the spread of bovine tuberculosis.

Now you know more about badgers, you might be able to spot one in the wild – though make sure to have warm country clothing and keep a safe distance from them! Take a look at our other fact files below: