Description: The mallard is the most familiar dabbling duck in Britain, with the green head of the male and mottled brown of the females. A medium sized waterfowl species, it is heavier than other dabbling ducks. 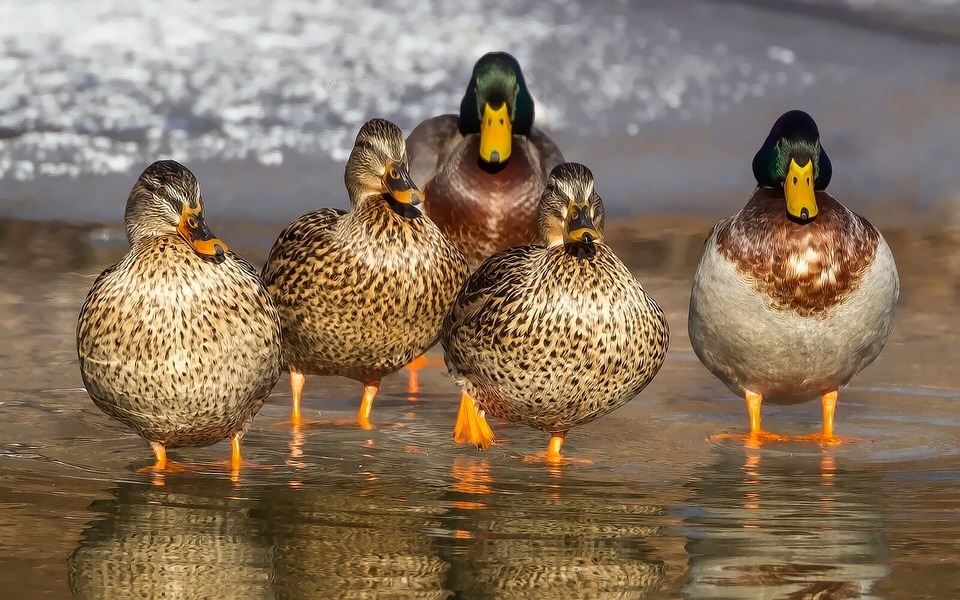 Species: Mallards are a species of Anatinae, part of a subfamily of the water bird Anatidae family, which contains swans, geese and ducks. There are around 50-60 living species and are named as dabbling ducks as they feed on vegetable matter by upending on the surface of the water and graze in grass.

Colouring: Mallards have a variety of colourings to identify. Breeding males are unmistakable with the bottle-green head, white collar, brown breast, grey-brown wings and pale grey belly. The males, called drakes, have yellow-orange bills. Female mallards, or hens, are mostly mottled brown, with feathers having a sharp contrast of buff to dark brown. They have buff-coloured cheeks, eyebrows and throat, and orange bills. Both male and female mallards have distinctive iridescent blue speculum feather edges in white, prominently seen during flight. Hatchling mallards are yellow on their face and chest with black stripes on the head and eyes, with brown back and wings.

Habitat: Mallards are found across Europe, Asia and North America. They are adaptable to a range of habitats and climates and can be found in both fresh and salt-water wetlands, parks, ponds, rivers, lakes and estuaries. Water depths that are less than 0.9 metres are preferred, as well as bodies of water with aquatic vegetation.

Diet: Mallards are omnivorous and flexible with their food. Diets may vary based on the stage of breeding, the food and nutrient available and competition from other mallards or ducks. The majority of a mallard’s diet is gastropods (slugs and snails), invertebrates, worms, seeds and plant matter.

Breeding: Mallards form pairs in October and November until the hen lays eggs at the start of the nesting season at the beginning of spring. Egg clutches number 8-13 and incubation takes 27-28 days. Fledging takes 50-60 days, and ducklings are capable of swimming as soon as they hatch.

•    Mallards are the ancestor of domesticated farmyard ducks.

•    Because male and female ducks look so different, they were initially thought to be different species.

•    Mallards are one of the wildfowl species which can be shot during their open season in England, Wales and Scotland.

•    Mallards wide-ranging distribution means they come into contact with other duck species and will mate with them, producing hybrids.

•    Broods can have multiple fathers, as though mallards are generally monogamous, drakes will sometimes pair with hens whose partners are not staying close.

•    Both sexes are completely flightless during the summer moult which occurs in June.

Are ducks one of your favourite birds to shoot during the season? Make sure you have updated your shooting and countryside wardrobe, including a quality tweed shooting jacket, for when the season rolls around again. Why not also take a look at some of our other animal fact files on waterfowl including the common snipe and woodcock?