Description: The Eurasian woodcock is a wading bird with a long, straight tapered bill that is found in temperate and subarctic Eurasia. There are both resident and migratory woodcocks in the UK, with 55,241 resident breeding pairs and 1.4 million wintering birds. 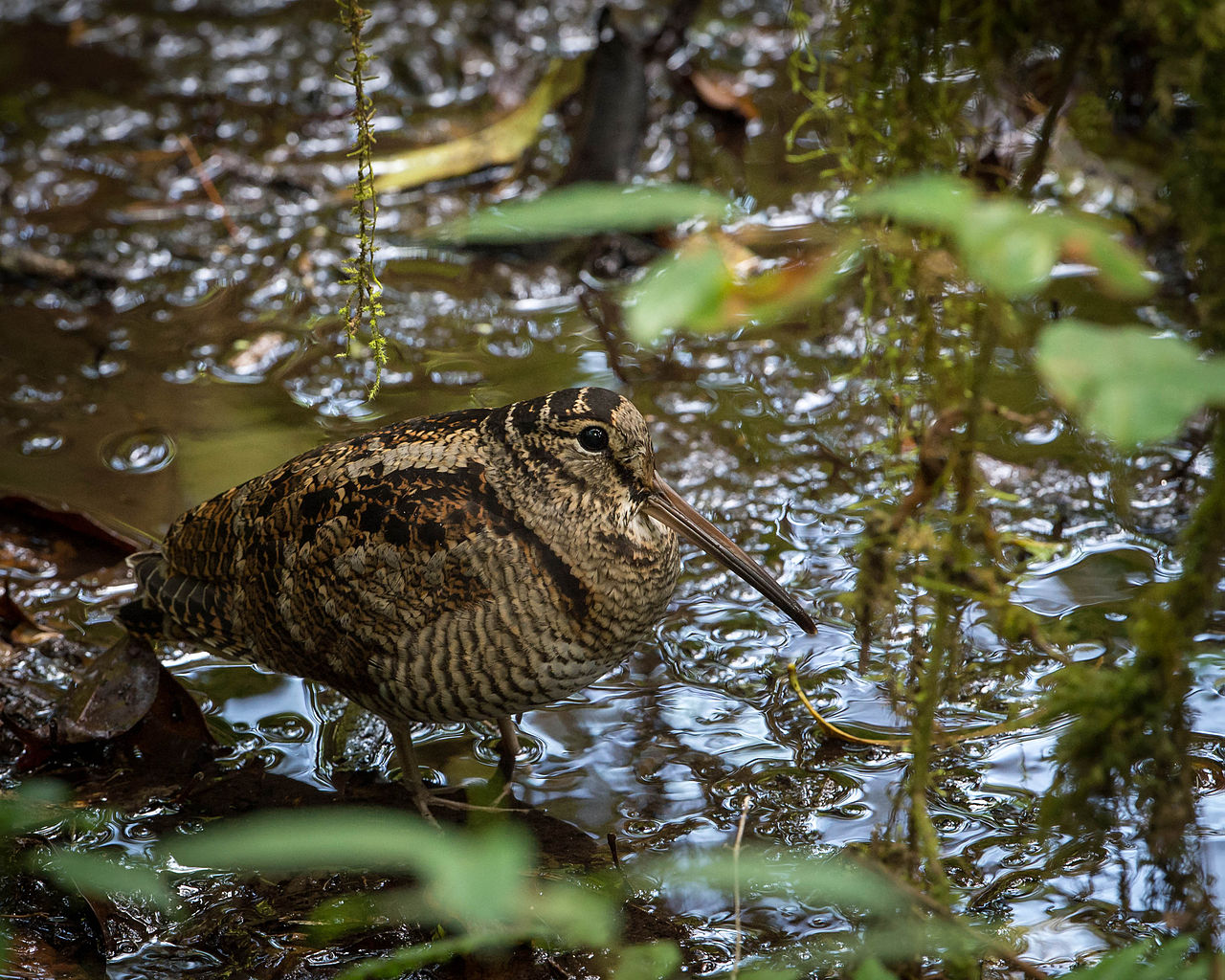 Species: The woodcock is a wading bird, of the genus Scolopax, with its closest relative being the similar common snipe. There are only two widespread woodcock species, the Eurasian and American, and the others are endemic to islands such as Sumatra and New Guinea.

Colouring: The Eurasian woodcock has cryptic camouflage to blend into its woodland and heathland habitat; they are mostly brown with an intricate black, grey and reddish barring pattern. Their legs are short, and greyish-pink and the underside is buff coloured. It has large eyes on the side of its head that give 360-degree monocular vision.

Habitat: Woodcock, as their name suggests, live predominantly in lowland woods near water where there is dense undergrowth to hide them. Breeding territories include warm and dry resting places, damp areas for feeding and clearings for flight.

Diet: Eurasian woodcock forage in soft soil, eating earthworms, insects and larvae and occasionally freshwater molluscs and plant seeds. Woodcocks are crepuscular – most active at dawn and dusk – and feed at this time in grazed pastures where there are more earthworms. As they have to probe the earth for food, they are vulnerable in cold winters when the ground is frozen.

Breeding: Males perform courtship displays between April and June, using a mating call. They nest on the ground in low cover, lined with dead leaves. A single brood of one or two eggs in a creamy colour with brown or grey blotches are laid. The female carries out the incubation for up to 24 days. The young leave the nest immediately and fledge at 15-20 days.

•    Though rarely witnessed, a mother woodcock can fly when carrying small chicks between her legs, in her claws or on her back when threatened.

•    Woodcocks fly in a zig-zag pattern between trees before dropping to the ground, which has made them a challenging shot for hunters.

•    Most of the migratory woodcocks that winter in Britain have flown from Norway, Finland and Russia, and 90% of woodcock shot in Britain are migratory.

•    Eurasian woodcock are considered at their best culinary-wise between October to December. They are tenderised for 4-8 days, and one bird serves one person.

•    One can become a member of the Shooting Times Woodcock Club after achieving the skilled feat of bagging a ‘right and left’; two woodcocks killed in consecutive shots from a shotgun without the gun being lowered or reloaded.

•    The Woodcock Club was established in 1949 and has a worldwide reputation. Members display lapel badges showing a logo with four pin feathers.

•    The pin feathers of woodcocks were highly prized by artists to be used as fine brush tips.

•    The Eurasian woodcock utters a high-pitched “pitz” noises interspersed with deep, guttural “aurk-aurk” sounds and studies have been able to attribute calls to exact males.

•    In folklore in the United Kingdom, it was said the early arrival of migrant woodcocks meant a good harvest.

•    It used to be thought the Eurasian woodcock flew to the moon in the months they were not seen, and the first full moon in November, when large numbers begin to arrive on British coasts, is sometimes called the ‘woodcock moon’.

•    The rare English surname of Woodcock apparently developed as a nickname from the bird and meant ‘simpleton’, and the name has also been used in Shakespeare plays such as Love’s Labour’s Lost to indicate fools or simpletons.

Do you enjoy shooting woodcock – have you tried to become a member of the coveted Woodcock Club? We’d love to hear about it! If you are an avid shooter and are looking to update your accessories and clothing as the season draws to an end, take a look at the range of gun slips and tweed jackets we have on our website.