Despite Britain’s island status and relatively small size, there are hundreds of different wildlife species that call the British Isles their home. Though some thrive and others are endangered, there are a lot of birds and animals to discover when out and about in the great British countryside. Our guide should help you detect and identify the most common wildlife species you can expect to see in the countryside.

As there is such a variety of animals and birds that can be found in the countryside, we are creating an ongoing guide to provide more information on the creatures you might be lucky to find in the wild. First of all, we look at mammals, particularly rodents which includes mice, voles, squirrels and the reintroduced beaver.

Once widespread in Europe and Asia, the beaver was hunted to near extinction. It has been reintroduced through much of its former range, including Great Britain, with success. Eurasian beavers are one of the largest species of rodent, weighing between 11 to 30kg. The colour varies depending on geography –  most found in Britain have light brown fur. Its distinctive features are the flat scaled tail, webbed feet, small ears and large front teeth. Beavers live in freshwater near streams, rivers, ponds and marshes, building dams and lodges with sticks and mud. In Britain, they can be found in Kent, Lancashire, Devon, Forest of Dean, Cornwall and around the River Tay in Scotland. Beavers are now recognised as British native species and heavily protected. 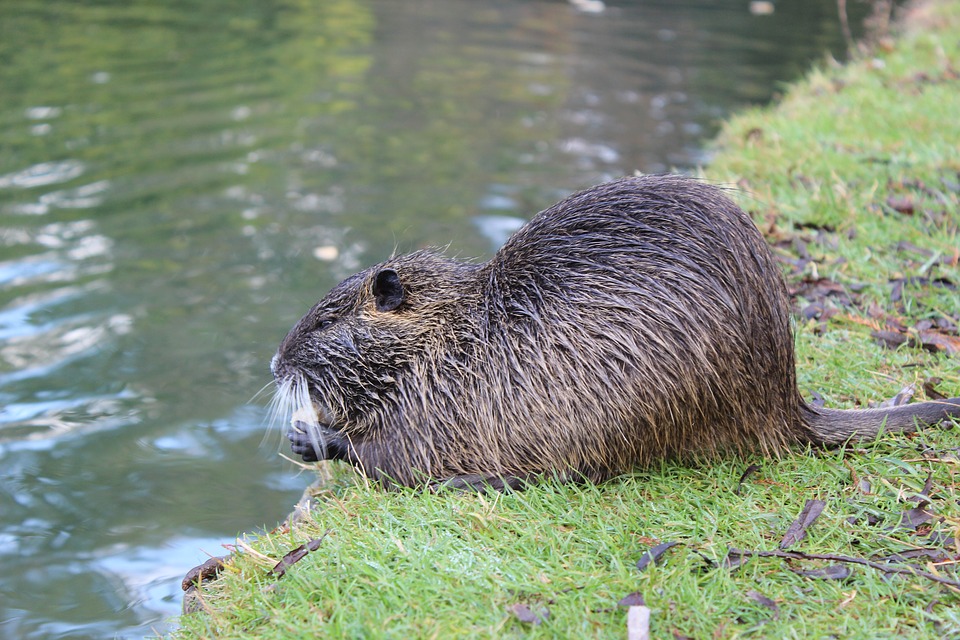 The bank vole is a small rodent, the smallest of the voles found in Britain and is native to Great Britain. Bank voles have a stout body, round faces and are a rich chestnut colour on their back and sides with a white belly. The bank vole has a longer tail than field voles. They live in deciduous woodlands, hedgerows, field verges and scrubland, eating fruit, nuts and small insects. They are widespread around Britain, though absent from most of the Scottish islands, Channel Islands, Isles of Scilly, Northern Ireland and the Isle of Man. As such, they have a least concern conservation status. 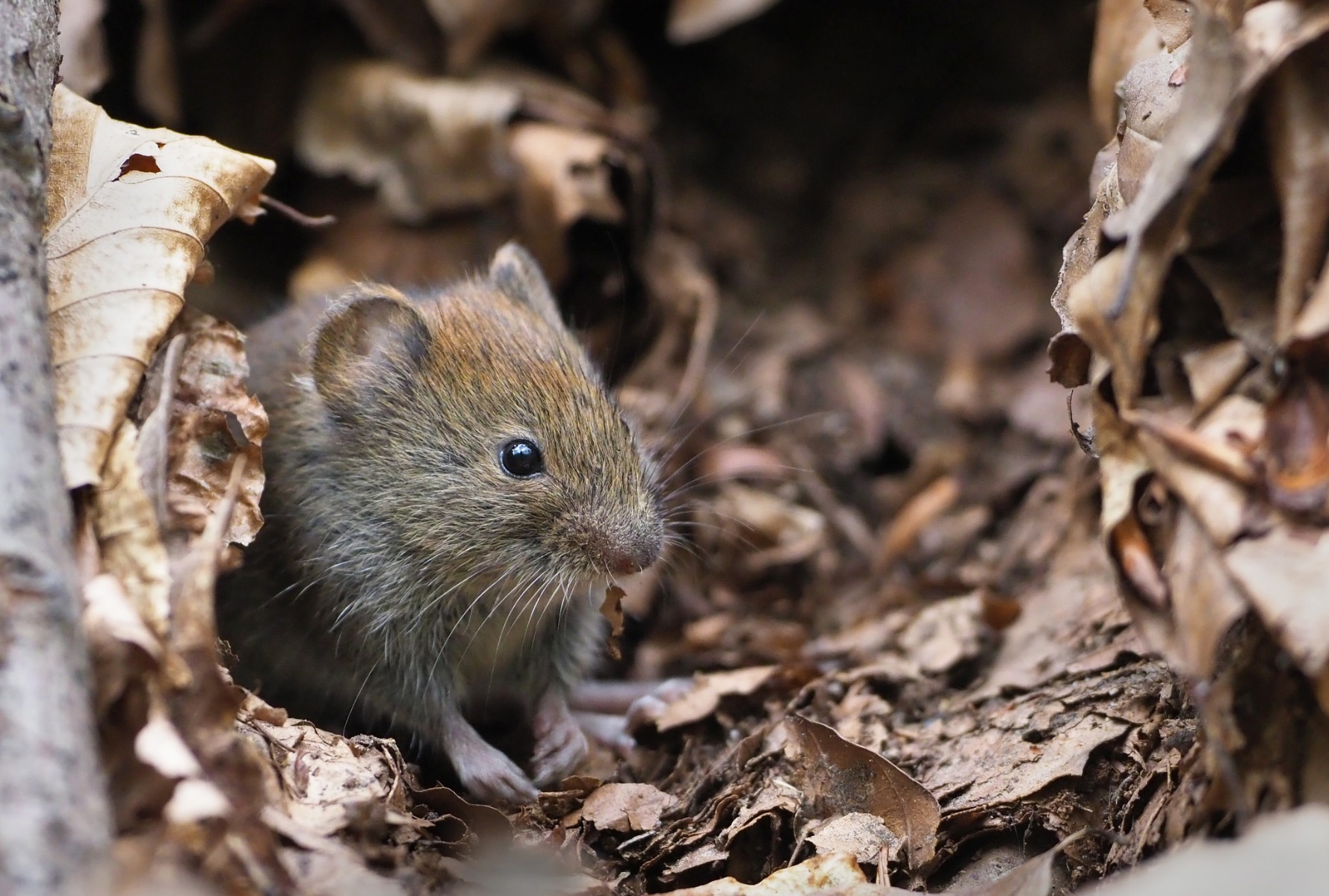 The field vole is one of the most common mammals found in Europe, with a UK population of nearly 75 million, and is considered of least concern regarding conservation. Field voles are also known as the short-tailed vole, and their habitat is mainly grassland, heathland and moorland, spending most of their time on the ground using runs leading to their burrows. Active day and night, they eat seeds and roots. Like other small rodents, the field vole is preyed on by kestrels, owls and weasels. They are grey-brown, paler grey below, and with shaggy fur. 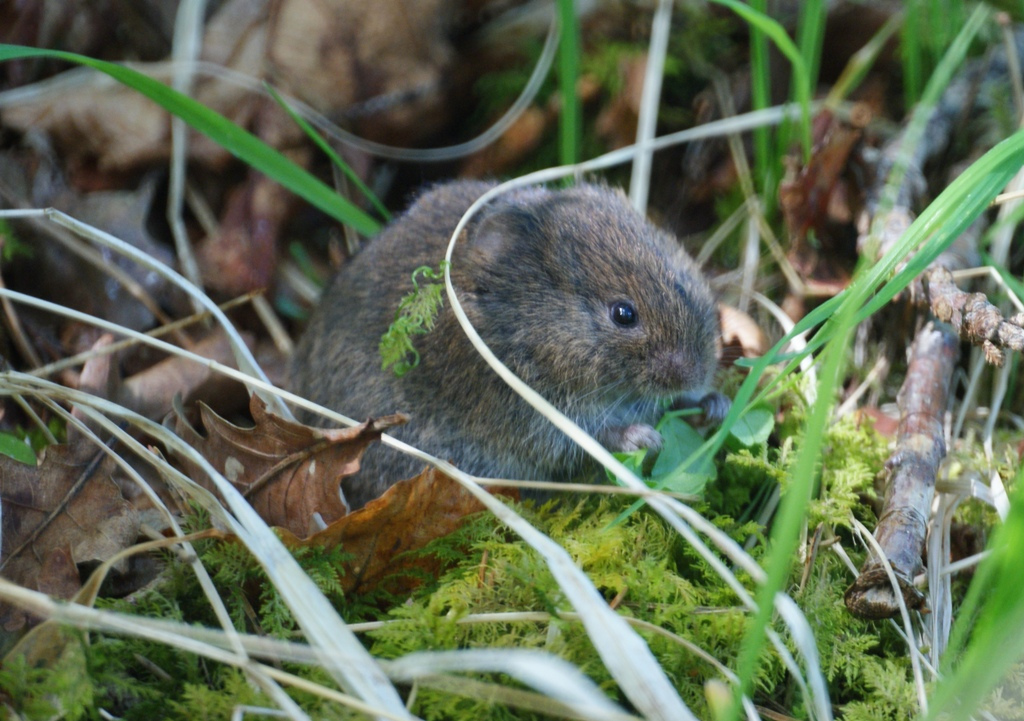 The water vole has chestnut-brown hair, a blunt nose, small ears and furry tail. It is much bigger than the other native British vole species, appearing closer to brown rats in size. You can spot water voles along rivers, streams, ponds, lakes, wet moorland, marshes and reedbeds – anywhere with freshwater. Signs a water vole is in residence are burrows on the banks, with nibbled grass around the entrance. They like to sit and eat in the same place, their diet consisting of buds, roots, twigs and other vegetation found near water. In England, water voles have been observed eating frogs and tadpoles too. 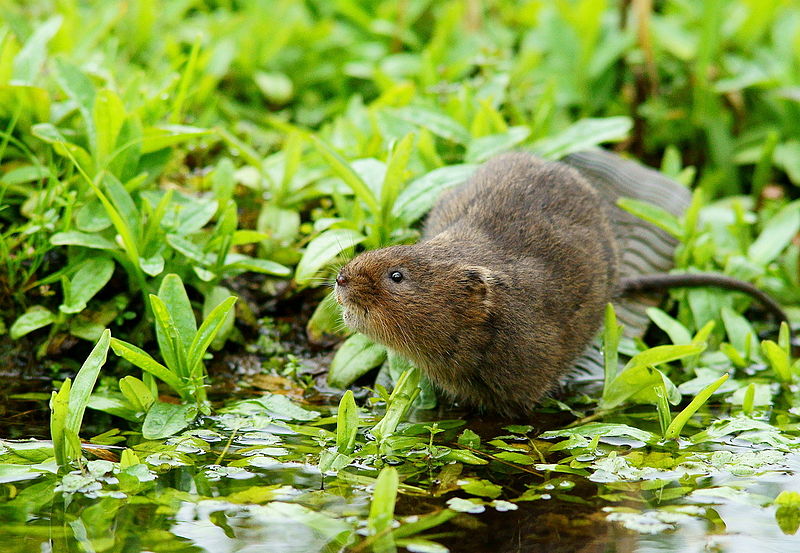 The brown rat is one of the most common rats in the world and known by several names such as common rat, street rat and sewer rat. Brown rats have grey to brown fur, a pointed nose, large hairless ears and long tails. They are widespread and adaptable to a number of different habitats such as farmland, grassland, woodland, wetlands, coastal areas and towns and gardens, which are perfect for their omnivore diet. They live in colonies in burrows and are good breeders, with females able to reproduce from three months old. Though the brown rat was introduced from Asia in the 1700s, they are now considered native to Britain. 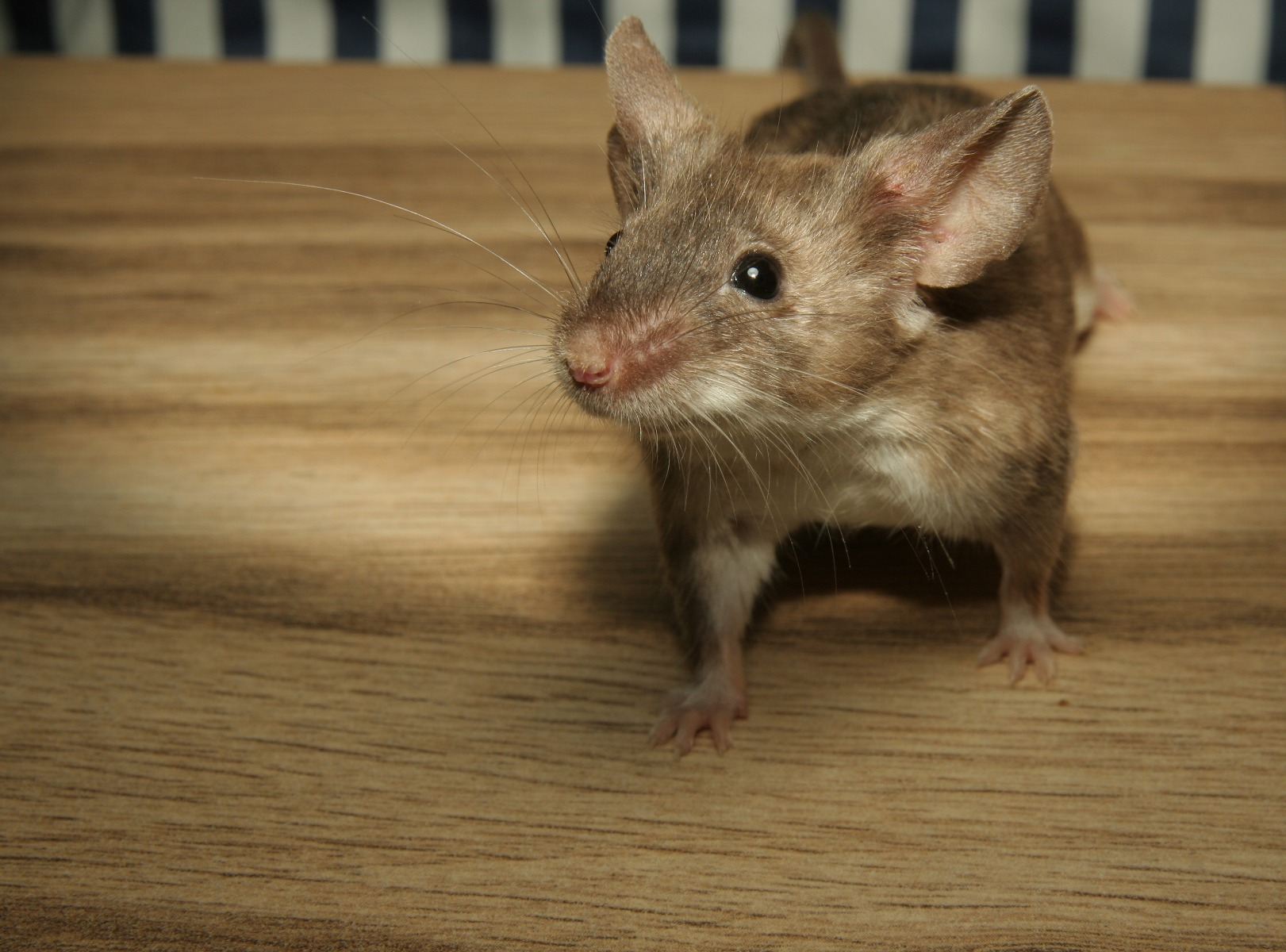 The tiny harvest mouse is one of the smallest rodents, half the weight of the house mouse at just 6 grams. They are pale, ginger or yellow in colour, with a hairless tail as long as its body. They are mainly found in cereal crops and farmland, also tussocky grassland and reedbeds, in southern and eastern parts of England. Their food is mostly seeds and fruit, and they build spherical nests in tall grass. Harvest mice have a prehensile tail, like monkeys, and use it as a fifth limb to hold onto grass stems. 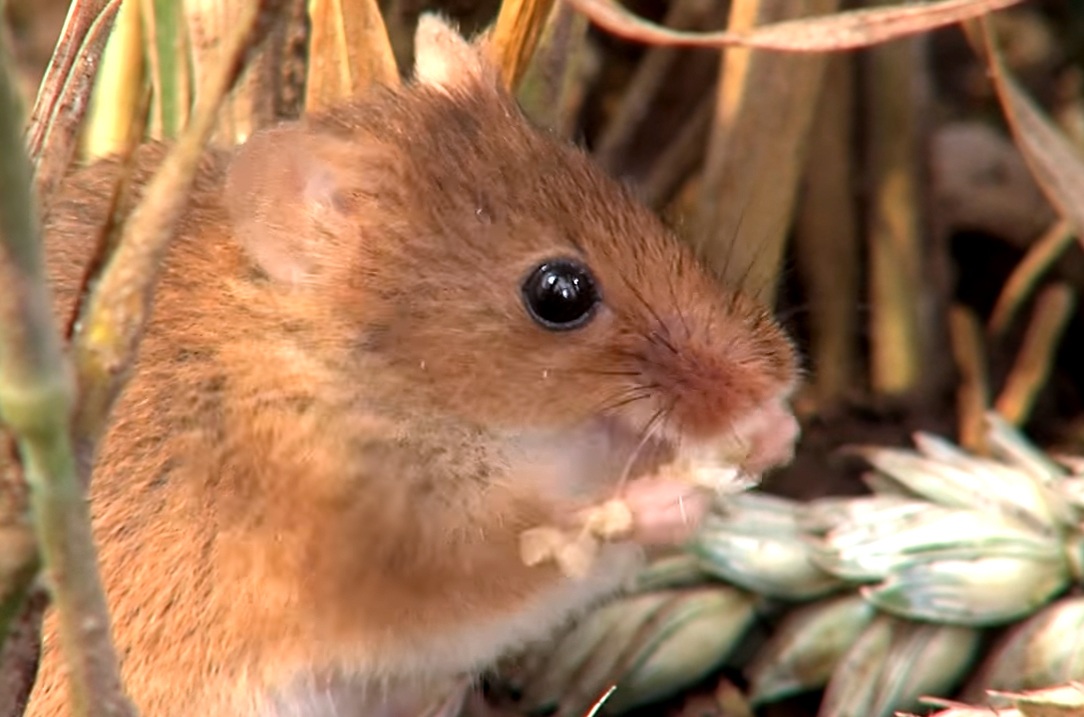 The hazel dormouse is possibly the hardest native rodent to spot in Britain, as it hibernates for a lot of the year, is nocturnal and only found in southern England and parts of Wales. It has gingery brown fur, large black eyes and a long fluffy tail. The dormouse is agile, able to climb easily in trees, hedgerows and scrub around farms and woodland, and rarely comes down to the ground. Hazel dormice have a diet of buds, berries, insects and, of course, hazelnuts. They build nests from grasses and hibernate under logs, leaves and at the base of trees or beneath the ground. Dormice can spend more than half the year hibernating to survive. 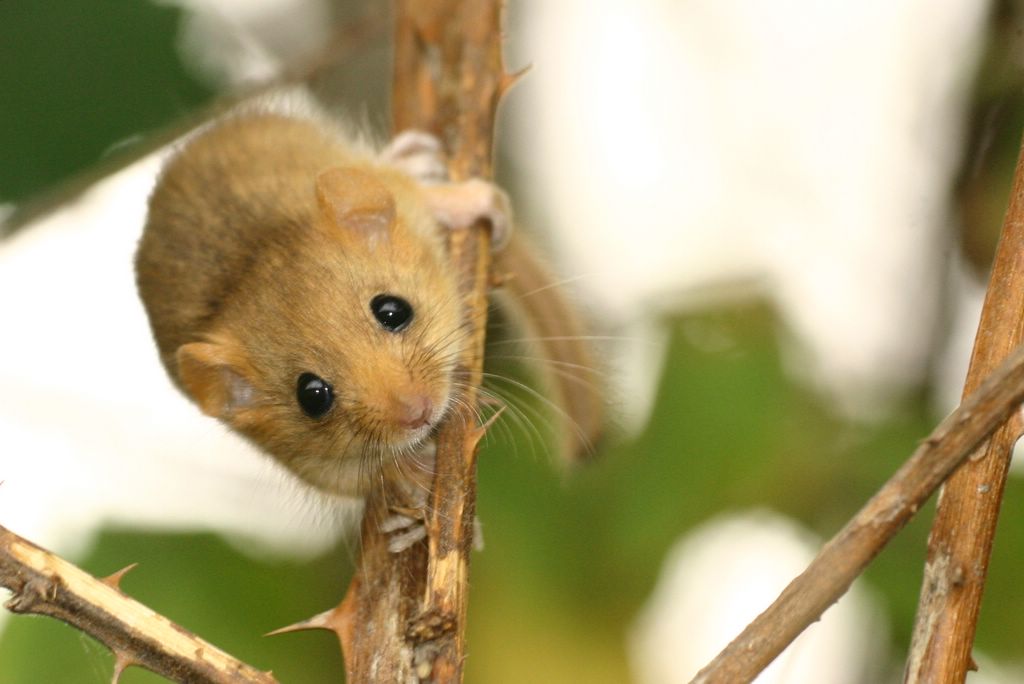 The small grey-brown house mouse is less likely to be found in houses due to modern construction, but the name has stuck. The large ears, pointed nose and long tail are other identifying features of the house mouse. House mice thrive where there are people: farms, warehouses, sheds and garages, eating grains, seeds, fungi and insects. Often considered a pest, they breed several times a year, producing four to eight young. They are found all over Britain around towns and cities. 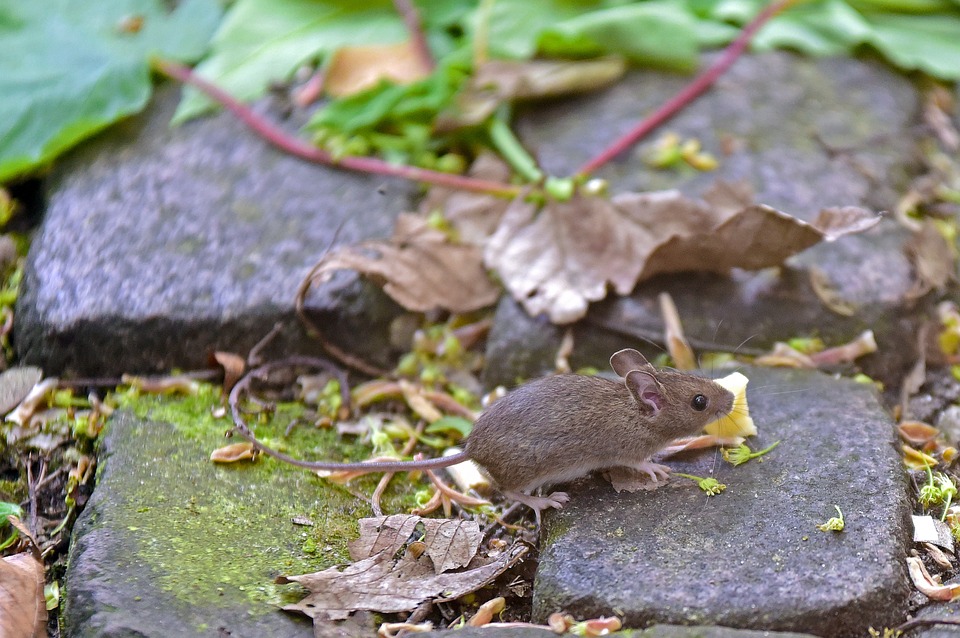 The wood mouse is Britain’s most common rodent and likely to be found in the country garden. It looks similar to the house mouse, with larger eyes and ears compared to its size and golden-brown. It is also called the long-tailed field mouse and widespread around the country, commonly found in woodlands, grasslands and gardens. Predominantly nocturnal, wood mice are good climbers and will gather food stores underground. As it is the most common mouse, wood mice are often the victims of cats, foxes and owls. 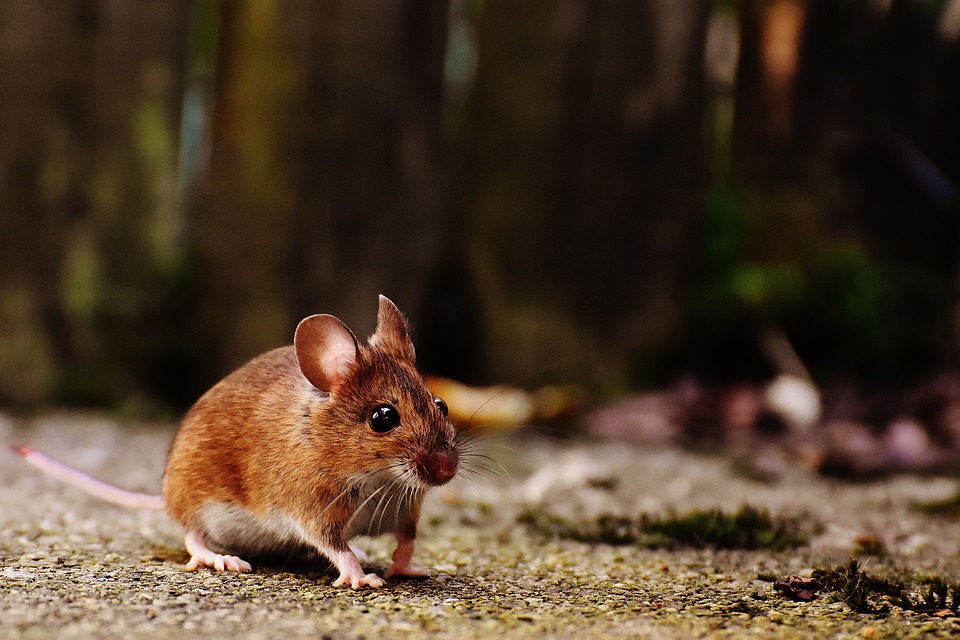 The grey squirrel was introduced to Britain in the 1800s and is one of the easiest rodents to spot in the countryside. It has caused damage to woodlands, however, and also contributes to the decline of the favoured, native red squirrel. The silver-grey coat and bushy tail make it easy to identify and it is  larger than the red squirrel. They are found in woods, gardens and parks around the country and are considered fairly tame, mostly unfazed by human presence. If food is abundant, they will cache it in autumn, eating buds, berries, seeds, acorns, nuts and tree bark. 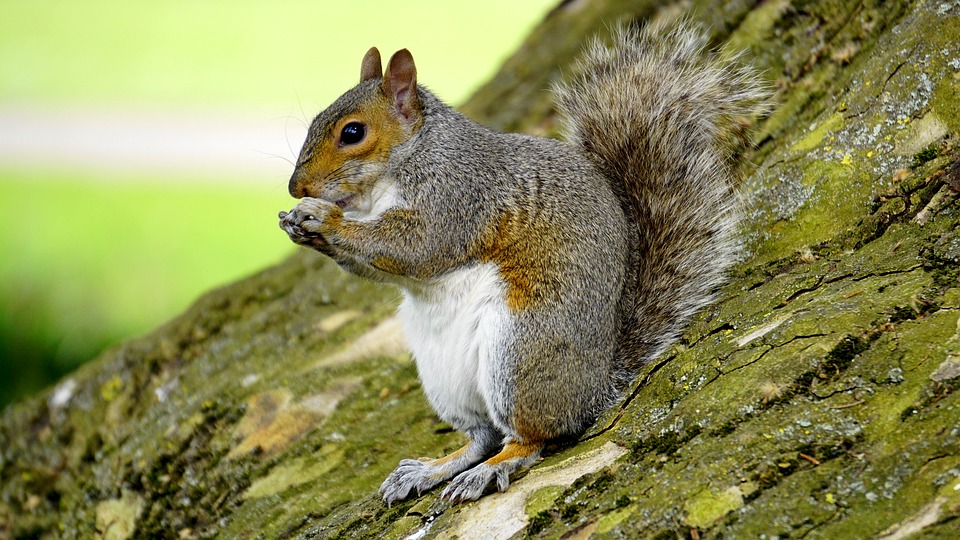 The red squirrel is native to Britain and found in the forests of the north of England, Scotland, Anglesey, Brownsea Island and the Isle of Wight. It can be identified by the large ear tufts, bushy tail and rusty red fur. It is smaller in size to the grey squirrel and found in coniferous woods. They feed on nuts, berries, fungi and the seeds of trees, stripping conifer cones to reach the seeds. Red squirrels do not hibernate and keep stores of food to help them through winter months. The number of red squirrels has reduced in population since the introduction of the more adaptable grey squirrel, and also the loss of woodland habitat. 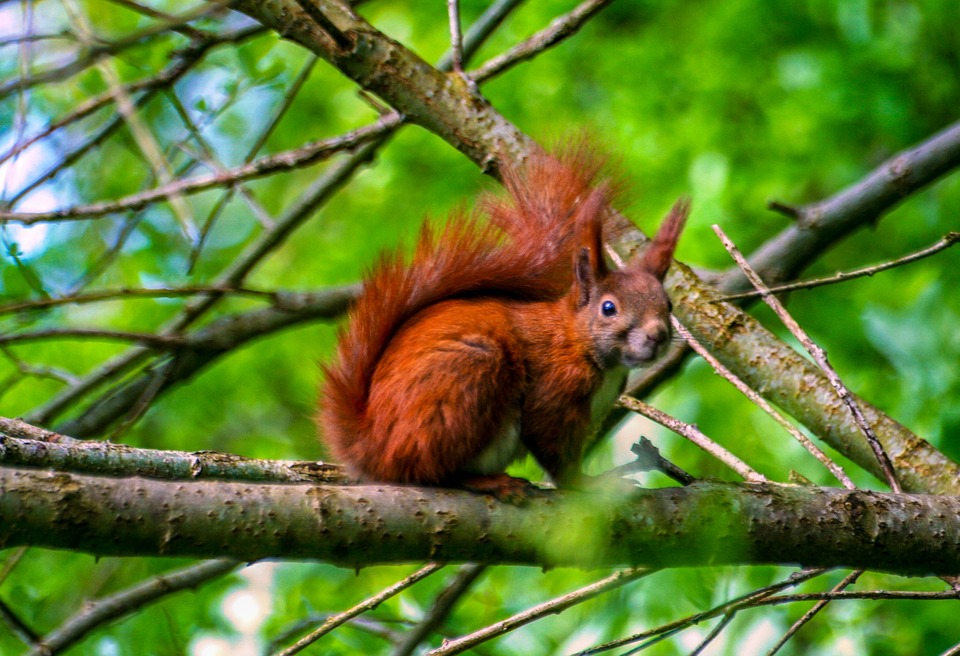 When out in the countryside wearing your best country clothing this autumn, be sure to keep an eye out for the British wildlife mentioned here! We’d love to know what rodents you have spotted recently, so feel free to leave a comment below or on our social media channels!